Kerzner to launch apartment sales at Royal Atlantis on the Palm

Kerzner International is launching sales of apartments at its Royal Atlantis Resorts and Residences on the Palm as it banks on an upturn in Dubai’s real estate investor sentiment.

The resort operator and developer is targeting high net worth individuals with prices for two-bedroom units starting at Dh7.65 million and rising up to Dh37.5m for a penthouse.

Construction of the 193-metre, 43-storey resort complex is expected to complete in the third quarter of 2019 and will be one of the tallest towers on the Palm. The resort wing will comprise 795 rooms and the residences arm will have 231 units. There will be space for 1,500 cars at the complex, which is spread over 10 hectares of land.

Designed by New York’s architecture firm Kohn Pedersen Fox Associates, which also worked on Abu Dhabi’s Midfield Terminal, the project will have 65 outdoor pools in the residential wing and a skypool at a height of 100 metres for the hotel’s guests that can be accessed by the hotel’s guests as well as the residents. 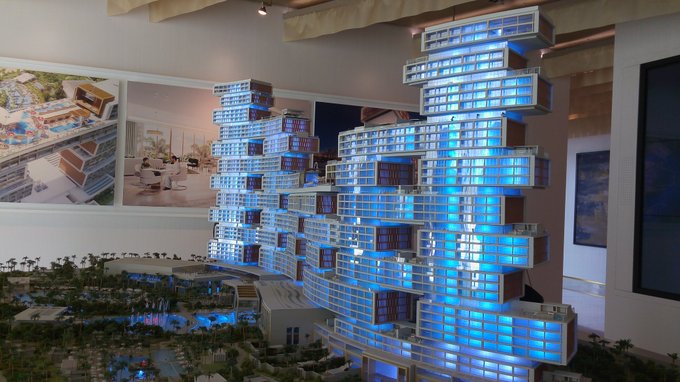 About 20 units at Royal Atlantis Residences, a fully-owned subsidiary of Investment Corporation of Dubai (ICD), will go on sale this Saturday.

Around 27 units were released in the last quarter to high net worth individuals at private shows. About 12 of those have been sold to Emirati, Indian, Belgian, Dutch and Russian buyers.

Unless 60 per cent of the unit prices have been paid, the developer bars investors from flipping or reselling the units.

Dubai real estate prices have shown a slowdown in the rate of decline last quarter, and the trend is expected to continue in the first quarter of this year, according to real estate consultant and broker Knight Frank.

Prices declined by about 5 per cent in the last quarter compared to the same period in 2015, and is expected to pick up after summer, it said.

“People are buying Ferraris and Lamborghinis even now, even when the crisis was there,” said Issam Galadari, the director of Royal Atlantis Resort and Residences. “We are targeting a different set of customers, especially people who would like to have a home in Dubai, and we are not really so worried about it.”

First announced in 2014, the Royal Atlantis Resort and Residences will cost US$1.4 billion to build, according to the owners ICD. The same year, ICD bought about 46 per cent of Kerzner. Istithmar World, a subsidiary of Dubai World, owns 25 per cent.